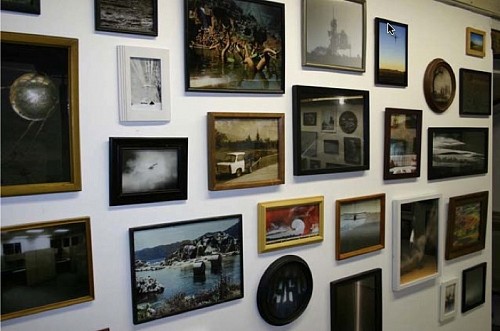 The following is a short excerpt from an interview between artists Dana Hoey and Oliver Wasow. They are discussing Wasowʼs on-going project “The Expansible Catalog.”

Dana Hoey: Can you talk a little about the intersection of the physical and conceptual manifestations of this project? Why so many pictures, why large editions and why so cheap?

Oliver Wasow: I tend to work on a lot of pictures at once. Part of the fun of working with a wall full of images is that I can move them around and group and rearrange them. I enjoy the practice of accumulating, indexing and categorizing things, especially pictures. Itʼs important though that the images work individually as well, that they function as singular objects of contemplation. Theyʼre made specifically with domestic environments in mind and to that end I frame each piece uniquely, usually in frames purchased in yard sales found near my house in upstate NY. They need to hold a wall by themselves.The decision to price the work cheap and in large editions was born out of two inter-related things; in a practical sense, the radical shift in methods of image production and distribution brought about by new technologies have allowed me to make the work at relatively little cost. I can print an archival image on my large format printer, adjust it until I am satisfied, and print it in large numbers for a small fraction of what the large color labs charge. And of course I can also sell the work on-line.

I suppose keeping the works affordable helps underscore a populist/consumerist edge to the work as well - if not in content, at least in terms of my distribution model. In some ways my inspiration for this project was the early and mid- twentieth century artist Wallace Nutting. Nutting produced literally millions of photographs and sold them for a few dollars each in department stores throughout America. Because he was constantly making new pictures, his picture catalogs were obsolete almost as soon as they were printed. In 1915 he published what he called his 'Expansible Catalogʼ. It opened at the spine so that retailers could add new pages illustrating new photographs. He employed a team of artists to hand-color his photographs and signed each image himself before they left his studio. The application of paint to his photographs not only loosened them from their ties to objectivity, but also insured their status as unique art objects.

DH: But your images arenʼt physically altered, are they? Theyʼre not unique objects.

OW: No, theyʼre not. But in some ways I think there is a parallel to be made between Nuttingʼs practice and the contemporary practice of digital manipulation. Most of my images are to some degree digitally altered, and like most of the images that make up contemporary visual culture, they have as much to do with painting as they do photography. I work with a fairly large collection of images, re-shaping them, applying image adjustments, collaging, etc., all towards on end of fairly infinite variations. Digital imaging encourages a relationship to image making that is really more about mutation than it is exact replication. I think Nutting would have appreciated this.

DH: Nutting is an interesting figure because he not only made work that was financially accessible to the middle class but his imagery was geared to them as well. He made pictures of cornfields, apple orchards and 19th century milkmaids spinning yarn by the fire. It was not a very progressive practice, at least not in terms of content. Do you feel an affinity with this aspect of his work as well?

OW: Yes and no. Itʼs true that his work was incredibly nostalgic and reactionary. This is a guy whose most famous quote is “everything new is bad”. He wasnʼt a big fan of the 20th century and during a time of massive industrialization and devastating world wars, he simply checked out and advocated a return to a “simpler time”. Iʼm not particularly interested in the propogation of mythologies of the past - or the future for that matter – to a political end. But I do feel an affinity with that aspect of his work that was engaged with the potential of imagery to be spatially and temporally transcendent. I know that nostalgia is a potentially conservative practice but itʼs also a healthy desire. We hang things on our walls in part because we want to create portals to other times and places. While Iʼd like to think that my imagery is more complicated and challenging than Nuttingʼs, the general urge towards escape from the present is really not so different. Much of the imagery in my “Expansible Catalog” is drawn from the contemporary world, but like Nutting, most of my pictures are also suggestive of a past that never was and a future that never will be.